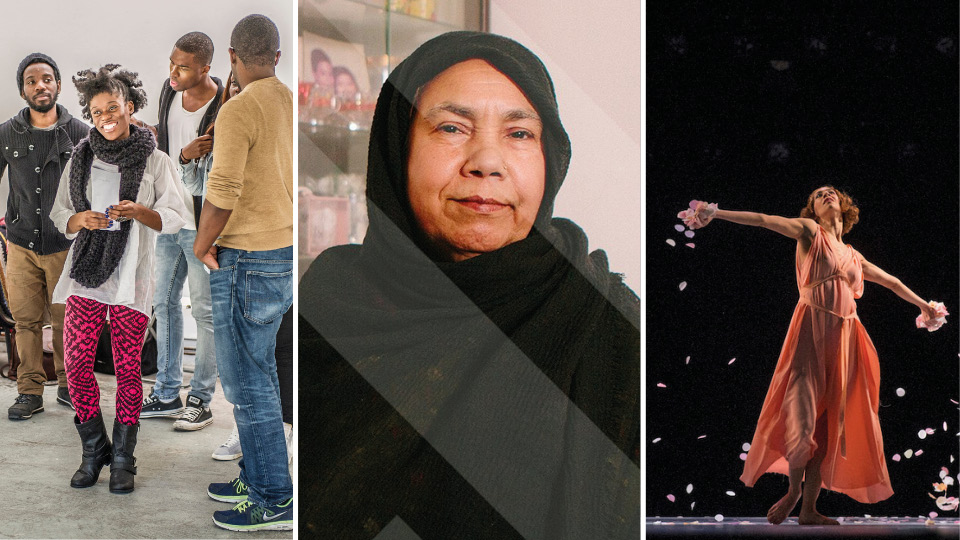 The installation is the first phase of a larger project that will archive the oral histories of diasporic communities, documenting their journeys, their authentic voices and rich cultural contributions to British society and establishing the UK as one of the most diverse countries in the world.

The installations runs from 17 – 31 March at Brixton House. Purchase tickets for Station

Ives: The Unanswered Question is a film, in which Oliver Zeffman, Simon Höfele, the strings of the Academy of St Martin in the Fields and the winds of the Simón Bolívar Symphony Orchestra, perform this piece by Charles Ives.

August 012 makes ambitious contemporary theatre in Wales and beyond the border, working with professionals and non-professionals together to create bold productions for today’s audiences.

Stupefaction is a direct response to 2020’s winter lockdown and a continuation of August 012’s exploration of online theatre-making. It investigates washing, cleaning, parenting and our relationship to stupefaction through the prism of Emile Zola’s seminal novel l’Assommoir.

The Genesis Kickstart Fund supported the R&D for this project, in which August 012 sought to find a format, online aesthetic and sonic language to best convey the lockdown period through Zola’s lens.

Watch the 3 videos that August 012 and its collaborators created based on the R&D:

The Dirt of Others

In addition to mentoring sessions, a career step-change programme, and paid work-based placements, the scheme also gives all mentors and mentees the opportunity to join its Community & Alumni Network, allowing them to meet industry peers.

Tangle accepts applications for AMPLIFY on a rolling basis. Read more about the scheme

In Tangle’s latest AMPLIFY community meeting, alumnus Shivaike Shah discussed how the scheme opened doors for his career and continues to offer ongoing support as he embarks on new projects. Watch video.

Amma | Tara Theatre
Founded over 40 years ago, Tara Theatre is the UK’s longest established Asian, Black or ethnically diverse led theatre company. We have supported the emergence of generations of South Asian artists and companies.

This Spring Tara Theatre will present AMMA, a VR performance which puts the Bangladeshi women’s experience in centre stage. The extensively researched and thought-provoking production allows audiences to experience first-hand what it was like to experience the war and in turn, leave for the UK in the 1970s and 80s to build a new life in a new place.

Fateha Begum and Nasima Begum have been leading workshops with local Bangladeshi women groups in Birmingham and Manchester. The two artists have been collecting stories about the women’s experiences of the Bangladeshi War of Independence. These stories and memories will form the foundation of AMMA’s script.

For Such a Time as this R&D | Young Identity

Young Identity is a network of creative freelancers, redefining the parameters of poetry and performance with young people.

Find out more about Young Identity

In its triple bill Isadora Now, Viviana Durante Company took up the challenge of capturing the impact of dance innovator Isadora Duncan for a new generation. Beginning with a striking reconstruction of Isadora’s own choreography, Dance of the Furies, followed by Frederick Ashton’s magical channeling of Isadora’s spirit in Five Brahms Waltzes in the Manner of Isadora Duncan, the show climaxes in a stunning new group work by Joy Alpuerto Ritter that blends the triumphs and tragedies of Isadora’s insistence on a woman’s right to express herself physically on her own terms with her legacy for future generations of female dancers, ending in an explosively affirmative climax.

Isadora Now premiered at the Barbican Theatre in February 2020, delivered by an all-female company of dancers and musicians, choreographer, composer and lighting and costume designers. Viviana Durante Company used its Genesis Kickstart Fund grant to reunite the team and remount and rework the show ready for touring. This led to an appearance at the Bolshoi Theatre’s DanceInversion Festival in Moscow this October, and future dates in the UK and abroad will shortly be announced.

Look out for updates on Isadora Now