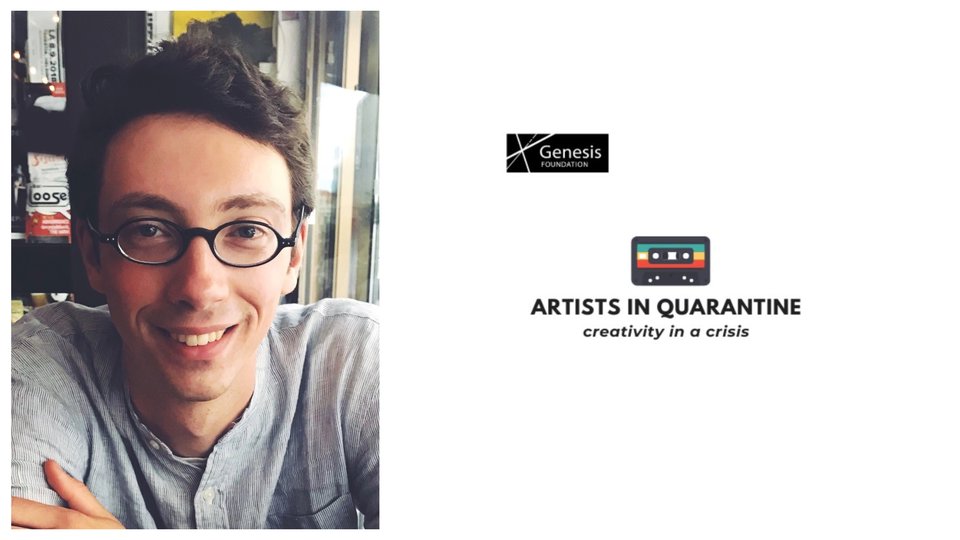 The new blog series throws the spotlight on Genesis artists in lockdown: directors, writers, actors, musicians and artists, who have had to figure out ways to stay creative and practise their art in a completely new way, sometimes in extremely challenging circumstances.

The Foundation wants to give the Genesis network an opportunity to showcase what they have been up to, to share the challenges they face and to show, with the intention of inspiring others, how they find resilience and creativity in lockdown.

I’ve been asked to write about what it’s like being an artist in lockdown and the glib answer is that I don’t know. These days, I don’t feel like much of an artist and I don’t feel very creative. At the best of times, writing is a chore (albeit the best chore in the world), but the problem is – right now – the world outside is imploding. So I seem to be spending a lot of my days wondering what it’s all for. The theatres are shut and, if there is a light at the end of the tunnel, it’s currently no more than a flicker. If I’m honest, it’s hard to keep the writing momentum going. There are days where I call it quits after my government-sanctioned walk and try staring at YouTube instead. Other days, I manage a slightly higher word count. But it’s hard to keep churning things out when the future is in such a strange limbo.

Ultimately, I think the difficulty of writing boils down to two contradictory questions. Number one: how do we respond to a moment like this – can we really make art that usefully makes sense of it all, that adds something extra to the storm of news and opinion and events? Number two: how can we not? And I don’t really have a good answer – I’m stuck for where to begin. So far, I’ve tried writing directly about this moment, I’ve tried writing about it indirectly, and I’ve tried ignoring it completely. None of it really seems to work. Sure, I’ve managed to write something. But the words take forever to emerge. And when they do land on the page, they never look quite right.

I should say that I’m very fortunate. I have steady work and, thanks to the awkward timing of this global lockdown, I’ve ended up moving back in with my parents. I can’t complaint. Except, most of the time, living here means I revert to moody teenager mode: stuck once again in a small flat with my uncool Mum and Dad. But, in the moments when I stop sulking, I remember how lucky I am to have a solid place to call home at a time like this. I may be a bit grumpy, and writing may be a bit difficult, but it’s hardly the end of the world. Except I regularly turn on the news to discover it actually is the end of the world.

I try to stick to a routine and stay productive. So far, my working days are much the same as they were pre-lockdown. Sit at a desk, write some words, drink some coffee. The only difference being the added conversations via Zoom. It’s just like normal – except it’s obviously not normal. The other night, we sat round the table to eat. My Dad boldly announced that London felt like his memory of Beirut in the early days of the Lebanese Civil War. It’s not comforting to hear that this moment is just like the beginning of a fifteen-year-long conflict. It’s probably not a helpful comparison but, as I try to figure out what he means, I realise he’s talking about the exact thing I’m experiencing: there is something unsettling about how quiet the outside world is. There are times when the view from my window is so calm it’s like everything else melts away. And then I remember what’s actually going on and start to think it’s disingenuous for the sky to be so clear and the birds to sing so loudly. It gets under my skin how ordinary this moment can feel.

This is all to say that things are currently very confusing. Which is obvious. Things are normal and they are not normal. And none of that is particularly conducive to good writing (except, apparently, when it comes to Shakespeare and King Lear). I can only speak for myself, but the closest I’ve got to something that works is simply to muddle through. Stick to the usual routine, but spice it up with long walks and long tea breaks and long lunches to bake banana bread. Accept that the bad days will be bad, the good days will be good, and just wait it out. It’s not exactly awe-inspiring, but I think I’m suspicious of anyone claiming to have answers at a time like this.

All of this paints a pretty miserable picture. But the thing that gives me hope is the outpouring of theatre produced online in the last few months. From theatres streaming their old work, to artists creating new work. Before all this, the theatre world was already struggling – and now it’s been brought to its knees. It’s a bleak state of affairs, but the exciting thing is seeing people who want to rebuild the system from the ground up. My brain may be too muddled to know what to do, but there are people out there who are already making a head start. Sometimes it’s intimidating to see all that creative output, but the rest of the time it feels hopeful. Because, when I start to wonder what it’s all for, I remind myself that theatre’s been going for thousands of years. It’s not simply going to stop. When it does return – however underfunded and difficult it’ll be – words will still be needed and writers will still need to write them. And that may feel far-flung at the moment but, on the good days, it’s enough of a spark to help me be creative again.

Even if I’m still figuring out where to begin.