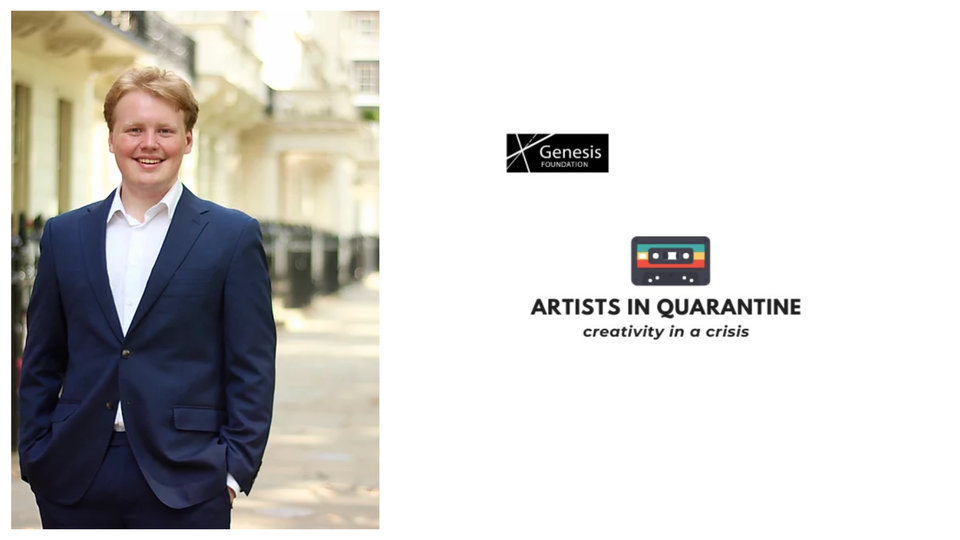 Harry Bradford is a prize-winning conductor and choral director based in London. He recently graduated from the Royal Academy of Music where he studied for an MMus Degree under Patrick Russill and was awarded both the Sir Thomas Armstrong prize and the prestigious DipRAM award for an outstanding final recital. Harry was the Genesis Sixteen Conducting Scholar 2018-19 and assisted Harry Christophers for the London premiere of Sir James MacMillan’s 5th Symphony. He is the Musical Director of Recordare, a new London-based chamber choir consisting of Genesis Sixteen alumni.

What’s your lockdown situation? Who’s on your quaranteam?

I’m staying with my flatmate in Putney – it’s quite a small space but I don’t think she’s totally sick of me just yet! We are quite lucky that there are a lot of different green spaces and picturesque walks around the area which helps to spice up the daily exercise route somewhat.

Are you able to work, are you inspired by what we are going through or do you find it challenging?

The last couple of weeks could be best described as a bit of a technological rollercoaster – I have gone from almost total technological ineptitude to a point where I am now able to run successful online rehearsals for the various amateur choirs that I conduct. I have been absolutely amazed at the quality of the computer programs and online resources we have access to during this period and, although it has been challenging and somewhat frustrating at times, I am sure that the skills I have learnt during this period will be incredibly beneficial for my practice in the future. It is fair to say that, purely from a selfish perspective, running online rehearsals via the use of pre-recorded videos and learning tracks comes nowhere close to the musical and social thrill of communal music making in person,  but I have been so heartened by the messages I have received from choir members expressing their gratitude. It is clear to me that music making, in any form, can mean so much to so many people during this tricky time.

Do you have a routine to stay creative?

Admittedly a lot of my time at the moment is spent on ‘Logic’ and ‘IMovie’ preparing resources for both my children’s and adult’s choirs. The rest of the time I’m either in discussions regarding exciting future projects, exploring new scores and music that I might be able to include in future concert programs or trying desperately to hone my decidedly average facility at the piano keyboard! Like most other choral musicians, I have also been experimenting with the virtual choir format. At the very beginning of the lockdown my colleagues and I at Recordare (a chamber choir formed of Genesis Sixteen Alumni) decided to come together ‘virtually’ and perform the first chorale of JS Bach’s St Mathew Passion. We were due to be performing part of the work as part of a project with Collective 31 – ‘St Matthew Passion Reimagined’ – in which Bach’s music would be interspersed with five new specially commissioned electroacoustic compositions that took their inspiration from the music of the passion. Fortunately, the project has been tentatively reorganised for next year so fingers crossed we will be in a position to perform by then!

Do you think what you’re going through will impact your practice long term?

I don’t think there is any way of sugar-coating the fact that this is very hard time for all musicians and we all have to accept that it could be fair while before we are all operating ‘as normal’. That being said, on a more positive note, it has become clear to me that despite technology’s great ability to, in some way, ‘plug the gap’ for art and cultural in people’s lives it has certainly not stopped people feeling at least partially starved of cultural nourishment – I’m so looking forward to, what I hope, will be an explosion of artistic endeavour when this is all over for audiences that are more eager than ever before for cultural enrichment in the flesh. We might also find that, after reaching a saturation point after months at home with Netflix, participation in music at an amateur level receives a welcome boost which would be a wonderful thing.

Is there any advice you would like to share to fellow artists, audiences or organisations on how to find resilience?

I think it’s important to take every day as it comes and to take pleasure in the little things. We need to remember why we do what we do and keep planning and looking forward as much as possible to when we can operate in an uninhibited manner again.