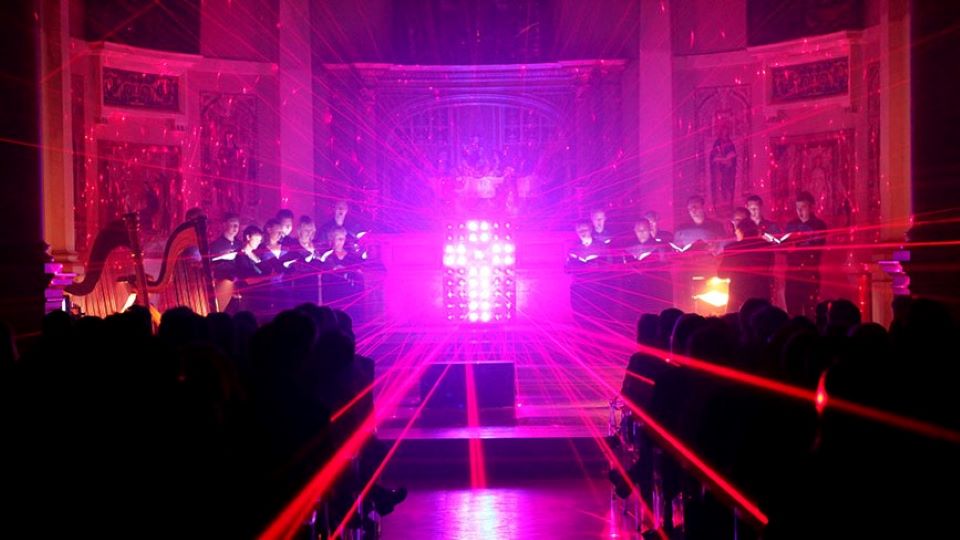 LIGHT, a dazzling installation by artist Chris Levine – originally commissioned by the Genesis Foundation in 2010 – goes live on 20 March 2020 in the 12th-century Galilee Chapel at Durham Cathedral.

Compounding its impact will be a soundtrack of sacred choral music, all of it commissioned by the Genesis Foundation and performed by The Sixteen under their conductor Harry Christophers. Among the composers is Durham native Will Todd, whose Among Angels accompanied the first presentation of LIGHT at Holy Trinity Church, Marylebone a decade ago.

The installation, which will remain in place until the end of the year, heralds the Genesis Foundation’s celebrations for its 20th anniversary in 2021. For Durham Cathedral, it marks out 2020 as the Year of Pilgrimage and signals the launch of the Northern Saints Trails, which affirms the Cathedral as a place of veneration and pilgrimage for visitors from all over the world. The Galilee Chapel houses the tomb of The Venerable Bede, a monk considered the greatest Anglo-Saxon scholar, who died in the year 735.

The Genesis Foundation has provided financial support for the installation, for which the headline sponsors are the Friends of Durham Cathedral.

LIGHT features a matrix of lasers in the form of a cross and an image of the St Cuthbert Pectoral Cross, one of the Durham Cathedral’s treasures. An immersive work that gently bathes visitors in light, it reflects the medieval ritual of foot-washing and creates a welcoming space for pilgrims who have journeyed to Durham.

“My work as an artist is a journey into exploring a deeper connection with our higher self through the use of light and meditation,” says Chris Levine. “In this elusive space of lightness, we can recalibrate, harmonise our senses and discover who we really are … Laser light is very pure, just single frequency light, and by focusing our attention on it and surrendering to the sensory experience, one enters a meditative state where stillness becomes a portal to the Divine.”

Over the past two decades the Genesis Foundation has established itself as the UK’s foremost commissioner of sacred choral music, engendering some 25 new works, the majority for performance by Harry Christophers and The Sixteen.

Find out more about the upcoming installation here.