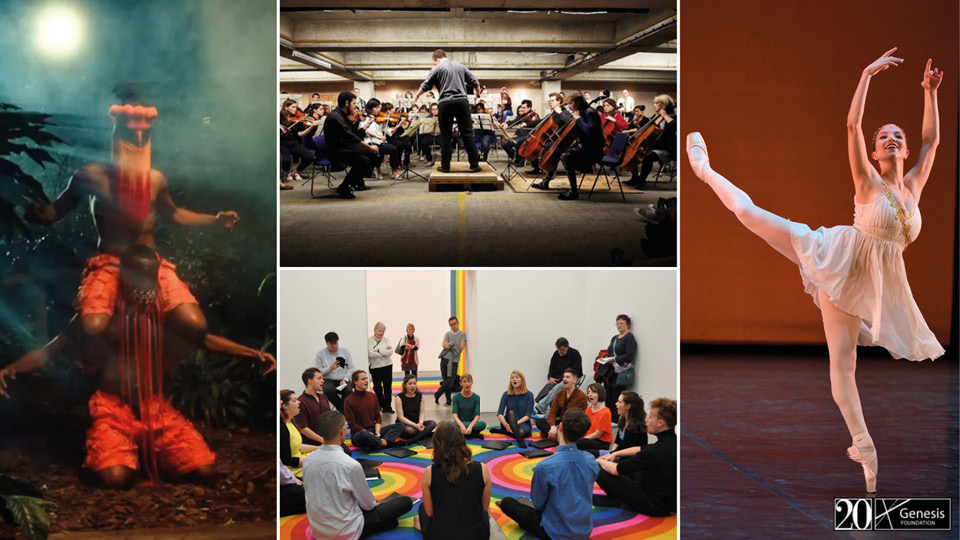 The £1 million Genesis Kickstart Fund was launched to support freelancers in the creative sector and specifically to help them survive and thrive in an environment transformed by Covid-19. 41 grants of mostly £10,000 have been allocated to creative freelancers throughout the UK, to produce future-facing arts projects.

Following on from our announcement of the first phase of Genesis Kickstart Fund projects, here is an update on the projects that have upcoming activity between now and September.

Acclaimed vocal ensemble Echo launches its ‘Already Gone’ Tour, a programme of new and old choral music in an innovative hybrid model blending in-person performance with a digital ‘behind the scenes’ video ticket.

Echo’s inaugural Composition Competition invited composers to respond to text from a poem by Alice Oswald, and was guest judged by Judith Weir and Robert Hollingworth. The ‘Already Gone’ Tour will feature the world premieres of the winning pieces, alongside a programme centred around nature and the climate emergency, including works by Hildegard of Bingen, Giovanni Pierluigi da Palestrina, Benjamin Britten and ANOHNI.

Our Future In Your Hands | The Multi-Story Orchestra

Performing in car parks around the UK, The Multi-Story Orchestra has been celebrated as one of the most exciting young orchestras to emerge in recent years.

Our Future In Your Hands is a brand-new choral and orchestral commission about the global youth protest against climate change, by composer Kate Whitley and writer Laura Attridge. It imagines the earth recovering from the negative effects of climate change and gives voice to the hopes and fears of the young people who will one day inherit our world.

Best Seat in Your House is the Young Vic’s immersive, multi-camera broadcast designed to give audiences optimal choice as they watch a theatre production live from home. Audiences will be given two streaming options, Director’s Chair or Director’s Cut, and they will be able to switch between views to control their experience.

The new platform will launch with Changing Destiny, the theatre’s first major production of 2021 directed by Artistic Director Kwame Kwei-Armah, which opens for previews on Saturday 24 July. Find out more.

Once Upon a Time in Nazi Occupied Tunisia | Almeida Theatre

The Almeida Theatre used its Genesis Kickstart Fund to support Josh Azouz on the development of Once Upon A Time in Nazi Occupied Tunisia.

Musician, songwriter and developing composer Rob Green is working alongside Musical Theatre composer, MD and vocal arranger Christella Litras and award-winning scriptwriter Leah Chillery to develop The Orisha Musical, a new piece of musical theatre that will be exploring African/Caribbean music and identity through comedy, adventure and multi-genre musical numbers.

A three-week R&D and two-day music recording session is taking place over the summer of 2021.

The English National Ballet’s Emerging Dancer competition shines a spotlight on new choreographic and dancing talent, introducing our worldwide audience to the next generation of stars and investing in talent retention and diversification.

Emerging Dancer commissions freelance choreographers to create contemporary pieces that are performed on the main stage by ballet’s rising stars. Six finalists, selected by their peers, receive tailored training sessions and private rehearsal time with industry mentors, giving them the opportunity to tackle new work that has been created especially for the project by the most exciting new choreographic talent.

This year, Emerging Dancer will take place in September, in London and will take the form of a Celebration Event, showcasing past winners, demonstrating the talent of young members of the Company and displaying innovative, new choreography. The event will also be live-streamed.

The Akram Khan Company, which recently celebrated its 20th anniversary, is embarking on the next decade with a new production, JUNGLE BOOK REIMAGINED, conceived by artistic director and choreographer Akram Khan.

Khan’s exploration of this classic book will take the familiar tale and observe it through the lens of today’s audience. Utilizing animation and technology to advance the story, the hybrid production of virtual and physical worlds will test the boundaries of the dance art form.

The Akram Khan Company used its Genesis Kickstart Fund grant for the research and development of JUNGLE BOOK REIMAGINED. The production’s world premiere will take place at Curve Theatre, Leicester in April 2022, and will tour nationally and internationally starting spring 2022. Book tickets.