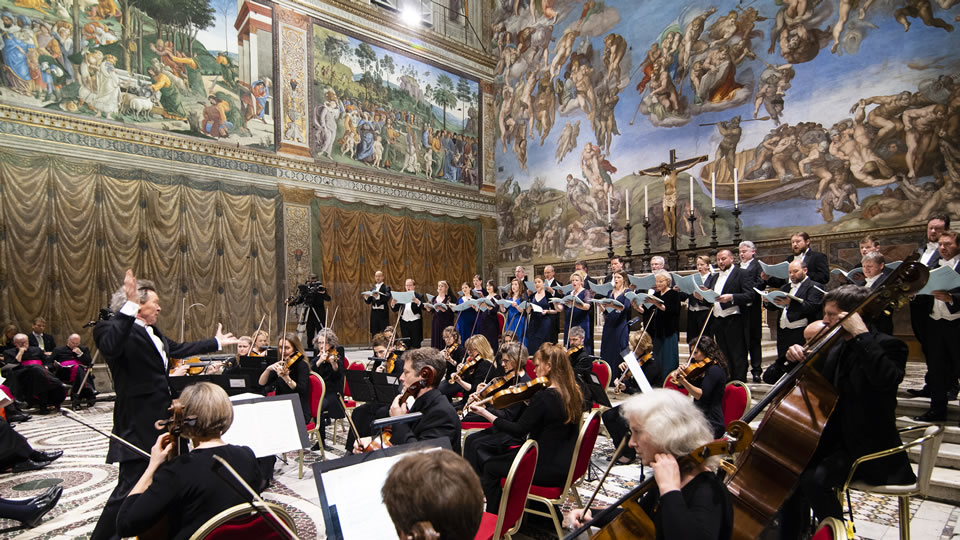 Genesis Foundation commission continues to move and inspire audiences after performances in the Sistine Chapel, London’s Barbican Centre and Scotland

James MacMillan’s Stabat mater is to receive its North American premiere on 7 November 2019 with a performance at New York’s Lincoln Center as part of its Great Performers series. The Stabat mater was commissioned by the Genesis Foundation for Harry Christophers and The Sixteen who will perform it in New York. They will be joined by Britten Sinfonia who have been the orchestra for all the other performances bar Scotland.

From its premiere in October 2016, MacMillan’s Stabat mater fast established itself as one of the most profound and moving contemporary sacred compositions. When the work was performed in the Sistine Chapel in April 2018 it become the first concert to be live-streamed from the Vatican. A highly praised album of the work, on The Sixteen’s own label, CORO is their best-selling recording of all time.

The Genesis Foundation is the country’s leading commissioner of sacred choral music, having commissioned 27 works to date, and has a long history of supporting both James MacMillan and Harry Christophers and The Sixteen.

The majority of the Genesis Foundation’s commissions have been for Harry Christophers and The Sixteen, including last year’s Star of Heaven which featured four world premieres of works based on texts from the Eton Choirbook. The Genesis Foundation has funded Genesis Sixteen, the free choral training programme for singers aged 18-23, since its inception in 2011.

John Studzinski, Founder and Chairman, Genesis Foundation said: “I am delighted that James’s Stabat mater is to receive its American premiere. Truly great works of art are rare. Works that challenge, deeply move and yet are also able to give hope are even rarer. James’s Stabat mater is all that and more. Those of us who have been fortunate to experience the Stabat mater live in concert know that it is a masterpiece that encompasses the timelessness of Mary’s grief for her dying son, a story as relevant today as it has ever been.”

James MacMillan commented: “Conversations with John Studzinski led directly to the composition of my Stabat mater. A great modern humanitarian inspired by faith, John always has interesting and pertinent things to say about the arts and the contemporary world. We agreed that the Stabat mater is a text which captures the sense of grief and anxiety which pervades much of the world today, afflicted as it is by war, despair and mass migration.”