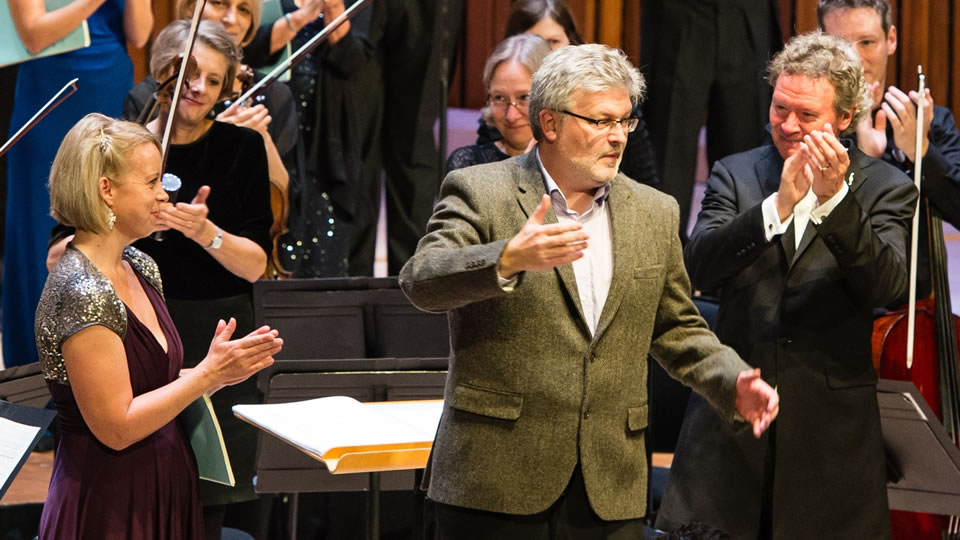 On Saturday 15 October 2016, the world premiere of the new Genesis Foundation commission by James MacMillan, Stabat Mater, was performed by Harry Christophers, The Sixteen and the Britten Sinfonia at the Barbican, London. Greeting this premiere performance, the audience rose to their feet in a standing ovation. This was the culmination of a three year project, including three other Genesis Foundation commissions focusing on the Stabat Mater text.

“It’s not often that the composer of a new work gets a standing ovation, but then every new work isn’t like James MacMillan’s Stabat Mater for chorus and string orchestra.”

“For MacMillan […] the text has a very different resonance. He speaks of a ‘painful world of loss, violence, and spiritual desolation’, and those are the intense feelings packed into his score.”

“[…] there were new sounds here, striking melodic ideas and […] a total integrity and depth in the way they were assimilated. To judge from the intense audience silence nearly throughout, many others must have felt the same.”

“MacMillan’s music has often been strongest when he brings all his forces closely together in pitch, so that the sound burgeons and the ear can’t process where each detail is coming from. There is a lot of that here in this angry, affecting score.”

“The thirteenth-century monk who wrote the Latin poem Stabat Mater Dolorosa about Christ’s grieving mother […] is loved, it seems, as never before. The Sixteen […] sang emotively the monk’s compassionate observations at the piteous scene, while the strings of the Britten Sinfonia seemed to voice the wrench of maternal agony. Conductor Harry Christophers shaped with his hands a work of bitter contemporary relevance.”

“MacMillan’s Stabat Mater is a sustained exploration of sorrow that has unlocked some of his most powerfully moving and bittersweet writing. From the numbed, almost terrifying, grief evoked by the orchestra in the opening part through to the radiance of the vision of paradise at its close with its eloquent violin solo, this Stabat Mater is a revelation, one which alternately shocks and soothes.”

“Studzinski is one of London’s great patrons of the arts.”

To read more about the premiere of James MacMillan’s Stabat Mater click here.

The Stabat Mater received its Scottish premiere in March 2017. Click here to find out more.