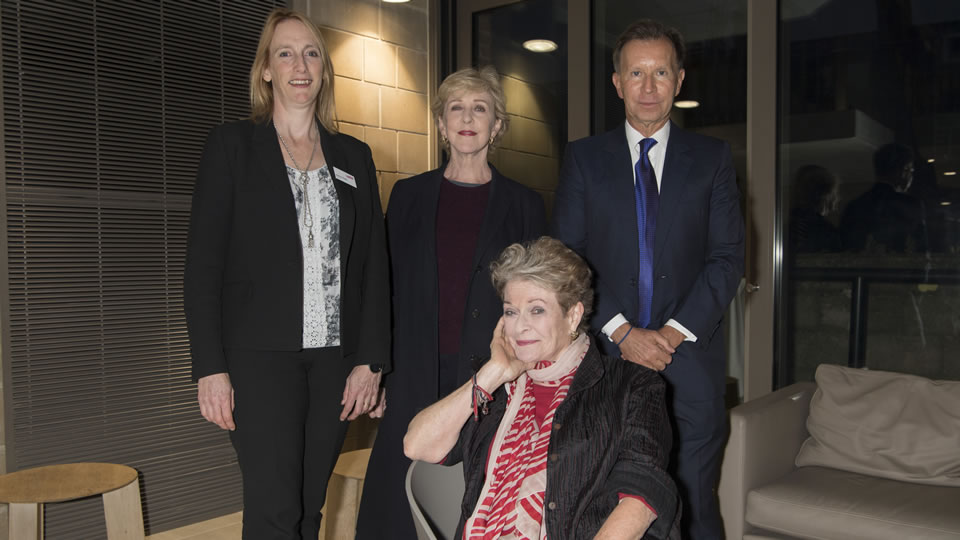 The Genesis LAMDA Network pairs a final year student on LAMDA’s BA (Hons) Professional Acting, Foundation Degree Professional Acting and Production & Technical Arts courses with an experienced graduate to support them as they enter the industry.

Devised in discussion with Dame Janet Suzman DBE, David Suchet CBE and alumni from across the industry, this new initiative is an extension of LAMDA’s existing alumni network.

The Genesis LAMDA Network forms part of the comprehensive professional preparation LAMDA offers its students to support them beyond graduation and equip them with the skills and knowledge they need to develop successful and sustainable careers in the industry.

The early days in the industry can be a challenging and daunting time for emerging artists. LAMDA is committed to supporting students beyond graduation, to equipping them with the skills and knowledge they need to develop successful and sustainable careers, and to ensuring their transition into the industry is as smooth as possible.

The Genesis LAMDA Network pairs a final year student on LAMDA’s BA (Hons) Professional Acting, Foundation Degree Professional Acting and Production & Technical Arts courses, with a carefully selected graduate mentor, to support them as they complete their training and enter their first year in the industry.

This peer-to-peer support will provide graduating students with a dedicated professional connection offering not only support and guidance, but also practical experience, industry exposure and contacts to support future employment.

Devised in discussion with LAMDA graduates Dame Janet Suzman DBE, David Suchet CBE and alumni from across the industry, this new initiative is an extension of LAMDA’s existing professional preparation programme and the Academy’s alumni network.

The Genesis LAMDA Network is currently being piloted with Class of 2017 students and LAMDA alumni in the UK and US.

LAMDA Principal Joanna Read says: “So many young artists and technicians entering this industry are focused on landing their first professional job. At LAMDA, we equip our students with the skills and knowledge to cultivate long-lasting and fulfilling careers after graduation and the Genesis LAMDA Network is an important addition to this existing professional preparation programme. The response has been hugely enthusiastic – alumni are keen to share their experience and expertise with our graduating classes and the Network is proving to be an important way to cement the bonds that already exist between different generations of LAMDA students.”

Founder and Chairman of the Genesis Foundation, John Studzinski CBE, says: “The Genesis Foundation is delighted to extend its partnership with LAMDA by launching this unique mentoring programme. We’ve sponsored 25 Genesis Scholarships at LAMDA these past 20 years, starting with Sam Barnett. This new scheme with LAMDA fills a need to provide support, guidance and networking opportunities for actors as they enter this precarious profession. Nurturing young artistic talent over the long-term, creating a network that keeps supporting them after they leave their training, has always characterised the work of the Genesis Foundation so I’m particularly delighted that we’ve teamed up with LAMDA to ensure all future LAMDA graduates receive mentoring from their third year onwards.”

Danny Lee Wynter, LAMDA graduate, Genesis LAMDA Network mentor and Founder of Act for Change says: “I am delighted to see that the Genesis LAMDA Network scheme is now in place and nurturing the careers of soon to be graduates by pairing them up with those of us who have had experience in what can often seem a daunting, somewhat overwhelming profession. Acting is a brutal vocation no matter what end of the scale you find yourself at. Support and good counsel is imperative.”

2017 LAMDA graduate and Genesis LAMDA Network mentee said: “My mentor gives a good insight into things that I don’t have the hindsight to chill out about. Something that doesn’t seem like a good thing to me, she would see as a real positive, which is nice […] It’s invaluable to have someone outside of the school and agent world who understands your experience and can give you advice or just chat to you about stuff.”

It is also an international awarding organisation, delivering qualifications in communication and performance and inspiring young people across the globe to become confident and creative communicators, equipped to realise their full potential.

LAMDA graduates perform on stage at the RSC, Shakespeare’s Globe, the National Theatre, in the West End and on Broadway. They also shine in film, television and radio – taking lead acting, directing and backstage roles for the BBC, HBO, Netflix and in Hollywood.

LAMDA believes drama has the power to transform lives. It wants more people to share in this experience through its training, qualifications, productions and facilities.

LAMDA students are selected on their individual merit, not on their background or financial circumstances. The Academy currently gives over £330,000 to students in scholarships and bursaries each year. In 2016-17, one in five of the student body on our degree courses received financial support. Both Sam Claflin (Me Before You) and David Oyelowo OBE (Selma) received scholarships during their time at LAMDA.

In addition to scholarships, LAMDA offers audition fee waivers to applicants from low income families and hosts auditions at nine regional venues across the UK, as well as in London, to reduce applicants’ travel costs and increase accessibility.

First jobs for LAMDA’s 2016 acting graduates included the title role in the HBO drama series Will (Laurie Davidson) and lead roles in Michael Winterbottom’s Love Song; Wolf Alice and in Phyllida Lloyd’s The Tempest for the Donmar Warehouse in London and New York (Leah Harvey).