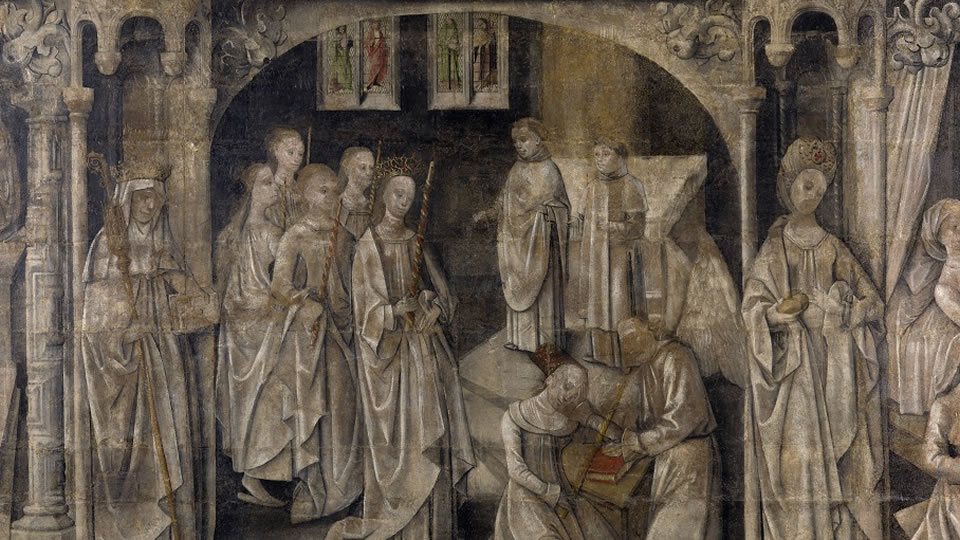 © Reproduced by permission of the Provost and Fellows of Eton College

Concert to be streamed live on www.classicfm.com and made available on their website for a month

The Genesis Foundation continues its commissioning and mentoring programme featuring a landmark faith text or artifact. At Eton College Chapel on Tuesday 22 May, The Eton Choirbook will receive its world premiere of newly-commissioned music by Sir James MacMillan and emerging composers Phillip Cooke, Marco Galvani and Joseph Phibbs.

All four pieces will use texts from the Eton Choirbook, an iconic music manuscript which features a collection of English sacred music composed by around twenty different composers during the late 15th century. A magnificent artefact, two feet tall and over three feet from side to side, it is one of the three collections of Latin liturgical music (with the Lambeth Choirbook and the Caius Choirbook) to survive the systematic destruction of Catholic religious imagery during the Reformation. The Eton Choirbook will be on display during the evening, a rare occurrence that will add to the uniqueness of the occasion.

The concert will be led by Harry Christophers and The Sixteen including eight Genesis Sixteen alumni who will also be joined by Eton College Chapel Choir under Tim Johnson.

John Studzinski, Founder and Chairman of the Genesis Foundation says:

“The Eton Choirbook reminds us of man’s ability to both create and destroy sacred texts and objects. Sadly, such abilities are today as evident as they have ever been so as we celebrate the Eton Choirbook’s treasures and enable young composers to write in response to it we’re mindful of both what we’ve lost but also mankind’s constant need to respond to the sacred.

“The Genesis Foundation has to date commissioned 21 pieces of choral sacred music to ensure new music of faith is constantly created and renewed. These latest commissions reflect our core beliefs in enabling artistic leaders to mentor younger talent and continuing our long-standing relationship with James MacMillan and Harry Christophers. I am also delighted that we are able to draw attention to the importance of the Eton Choirbook and its place in British history.”

“John Studzinski and the Genesis Foundation share a passion with The Sixteen to nurture young talent and we are so grateful to them for the support and opportunities they give young composers and artists. Our longstanding relationship with both the Genesis Foundation and James MacMillan is one we treasure and I am so looking forward to performing four Genesis Foundation commissions which are inspired by The Eton Choirbook. A miracle both physically and symbolically, we are so fortunate that The Eton Choirbook survived the Reformation so that we can enjoy its extraordinarily complex works whose legacy continues to inspire new sacred choral music in the 21st century.”

“My collaborations with John Studzinski through the Genesis Foundation and Harry Christopher’s great choir The Sixteen have become some of the most fruitful artistic experiences in my life. A major part of this is being able to talk with, and mentor, some younger composers on their journey into sacred choral music. This new Eton Choirbook project, where we have all engaged with the deep musical past to inform our musical present, has been fulfilling and enjoyable.”

Through workshops with Genesis Sixteen led by Harry Christophers and Sir James MacMillan, the three composers created new pieces in response to the Eton Choirbook which will be performed with music from the Choirbook by Walter Lambe, William Cornysh, Charles Parry and Robert Wylkynson, often based on the same text.

John Studzinski and the Genesis Foundation are the most prolific commissioners of sacred choral music today. Recent commissions include MacMillan’s Stabat mater which was recently performed by The Sixteen and Britten Sinfonia under the baton of Harry Christophers in the Sistine Chapel. The concert was the first ever live-streamed concert from this iconic venue and reached several million people worldwide.

The partnership between the Genesis Foundation, Sir James MacMillan and Harry Christophers has focused on the mentoring of young composers. Previous projects include the commissioning of three new Stabat mater in 2014 by Alissa Firsova, Tõnu Kõrvits and Matthew Martin, new music to poetry of the Spanish Mystics by Ruth Byrchmore, Tarik O’Regan and Roderick Williams in 2011 and, in 2008, James MacMillan, Roxanna Panufnik and Will Todd wrote music to settings of Padre Pio’s prayer Stay with Me, Lord.

Harry Christophers and The Sixteen have performed and recorded the Genesis Foundation’s sacred music commissions these past ten years, including James MacMillan’s Stabat mater, and will also be recording the Eton Choirbook for future release on its own record label CORO.