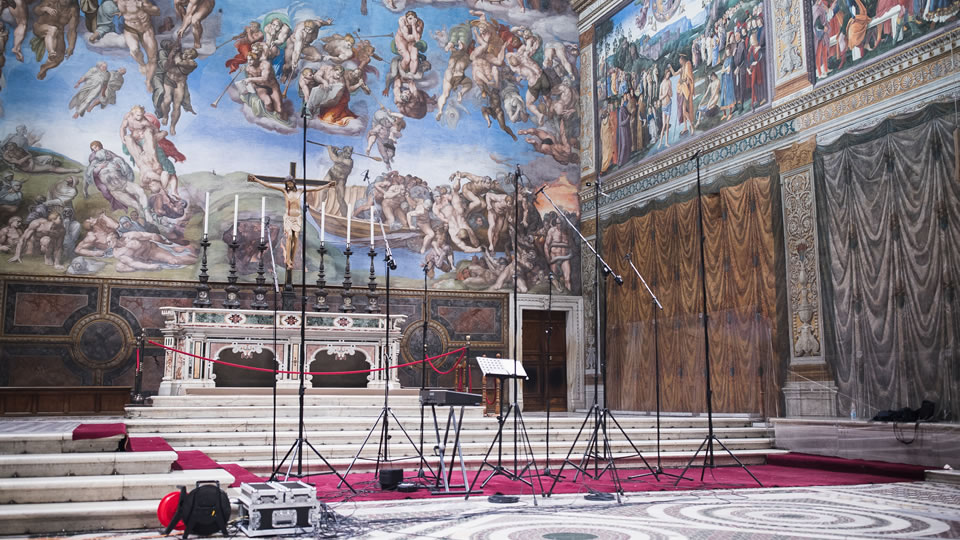 22 April 2018: Vatican premiere of Sir James MacMillan’s masterly Stabat mater to be available free to audiences worldwide for a month

Harry Christophers, The Sixteen and Britten Sinfonia to perform this

On 22 April audiences around the world will be able to watch the performance of Sir James MacMillan’s Stabat mater from the Sistine Chapel as it becomes the first ever concert live-streamed from the Vatican.

Available for one month on Classic FM’s website, the concert is a rare honour, bestowed on the Genesis Foundation, as few performances are given in the Sistine Chapel and even fewer are given by ensembles not based in the Vatican. The Sixteen will become the first professional British choir to sing there in over 20 years.

The much-lauded choral setting by Sir James MacMillan of the Stabat mater, was commissioned by the Genesis Foundation for Harry Christophers and The Sixteen. This world renowned choir will be joined by Britten Sinfonia, as they were at the work’s world premiere in October 2016 at London’s Barbican Centre, in a continuation of the ensemble’s close relationship with the Genesis Foundation and MacMillan. Greeted with a standing ovation at the Barbican, the 55-minute work has since been hailed repeatedly as a masterpiece. A recording, released on The Sixteen’s own label, CORO, was shortlisted for a 2017 Gramophone Award.

MacMillan followed such composers as Pergolesi, Rossini, Dvořák, Szymanowski and Poulenc in setting the stark and searing 13th-century liturgical text, which meditates on the suffering of Mary standing at the foot of the Cross. It is therefore especially apt that the Vatican performance will take place just three weeks after Easter, on Sunday 22 April.

John Studzinski, Founder and Chairman of the Genesis Foundation says:

“I’m delighted that many hundreds of thousands of people will experience James’ Stabat mater direct from the Sistine Chapel. It is rare for a new, hour-long work of sacred music to move audiences across the world as soon as it has been premiered, but James MacMillan’s Stabat mater is that rarity. A masterpiece, it has instantly connected audiences to the timeless story of Mary’s suffering as she observed the suffering and death of her son Jesus and simultaneously rose to become the Mother of Mankind.

“All of us at the Genesis Foundation have been touched by the way people have reacted so powerfully to the Stabat mater. To join our long-term collaborators, Harry Christophers and The Sixteen, in bringing this great work to one of the world’s most sacred sites will be an unforgettable experience, and the performance will reaffirm music’s capacity to reinforce the spiritual power of words. I wish to extend my thanks to the Papal Household for its gracious permission in permitting this performance to take place in the Sistine Chapel, and to Cardinal Vincent Nichols, Archbishop of Westminster, for his commitment to this entire undertaking.”

“The Stabat Mater is a remarkable prayer. It expresses a burning desire for a share in the sufferings of Mary and Jesus. In this it stands in sharp contrast to our contemporary reaction to suffering, which is to flee whilst tossing blame over our shoulder. But this prayer begs for an active share in this suffering. It cries out a willingness, out of love, to stand by those who are suffering, taking their pain into our hearts. It is, radically and remarkably, a mother’s prayer. The composition of James McMillan powerfully explores the intensity and drama of this prayer. Its performance in the Sistine Chapel will be an experience never to be forgotten.”

Harry Christophers, Founder and Conductor of The Sixteen, commented:

“James digs deep underneath the surface of this 13th century Marian hymn meditating on Mary’s suffering as she stands at the foot of the cross. He speaks of ‘a painful world of loss, violence and spiritual desolation’ and the score is packed to the full with those intense feelings. We are so grateful to John Studzinski and the Genesis Foundation for its support and cannot wait to perform this masterpiece in the Sistine Chapel.”

The Stabat mater marked the culmination of a project run by the Genesis Foundation over a period of three years, Stabat mater: Spirit, Strength & Sorrow. James MacMillan and Harry Christophers had already mentored three outstanding young composers – Alissa Firsova, Tõnu Kõrvits and Matthew Martin – as they prepared their own, a cappella choral settings of the Stabat mater, premiered at LSO St Luke’s in London in June 2014 and subsequently recorded for the CORO label. Genesis Foundation commissions prior to Stabat mater: Spirit, Strength & Sorrow include choral works by British composers Ruth Byrchmore, Roxanna Panufnik, Will Todd, Tarik O’Regan and Roderick Williams.