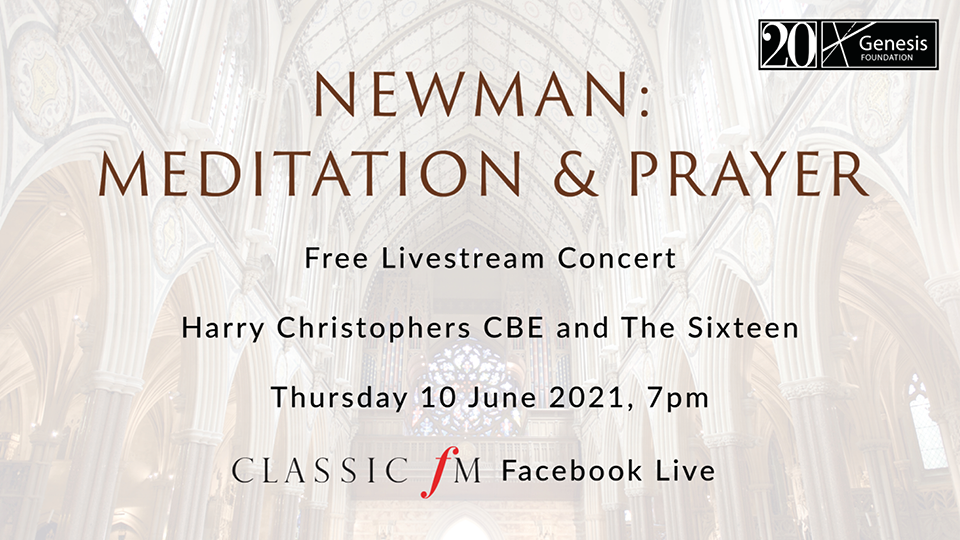 Harry Christophers CBE and The Sixteen in Concert

Watch the concert on demand

The Genesis Foundation announces a special concert inspired by the life and writings of Cardinal Newman, who was canonised as Saint John Henry Newman in 2019. Newman: Meditation & Prayer will take place at 19:00 on Thursday 10 June at Farm Street Church in London’s Mayfair (The Jesuit Church of the Immaculate Conception).

The concert will be live streamed on Classic FM’s Facebook page and available on demand for a month afterwards; it will feature the world premieres of two new Genesis Foundation choral music commissions by Sir James MacMillan and Will Todd, for Harry Christophers CBE and The Sixteen. Joining them will be Classic FM’s flagship morning show presenter Alexander Armstrong, reading the words of Cardinal Newman and the poet and churchman John Donne.

The new commissions draw on the words of a meditation that Newman wrote in the late 1840s and which begins “God has created me to do Him some definite service.” MacMillan and Todd have already composed a number of works for the Genesis Foundation which, over its 20-year history, has commissioned more than 25 pieces of sacred choral music. In April 2018, in a world first, Classic FM, the UK’s most popular classical music station, live streamed MacMillan’s 50-minute Stabat mater – a Genesis Foundation commission performed by The Sixteen and Harry Christophers – from the Sistine Chapel in the Vatican.

“I have been intrigued by Newman’s poetry since I heard Elgar’s setting of his Dream of Gerontius when I was young. This Meditation, in a wonderfully flowing and singable adaptation by Robert Willis, tackles existential issues with a challenging suggestion that God has created us all to do some individual service. And that even at times of great distress and alienation we are valued by Him and capable of doing good, as nothing conceived by God is done in vain. I have set this short extract for double choir in a motet which lasts about ten minutes. Pre-baroque contrapuntal models give the music its shape and design, even although there are passing moments of deliberately ‘smudgy’ polytonality, pitting adjacent chords up against each other. Nothing in vain is dedicated to John Studzinski on his 65th birthday.”

Newman: Meditation & Prayer will also include sacred music by composers active in the 16th Century, the period of the English Reformation (Robert Parsons, Christopher Tye), and in the 20th Century (William Harris, an Anglican musician, and Fernand Laloux, who was organist at Farm Street Church). Armstrong will read Newman’s original Meditation and an extract from John Donne’s ‘A Sermon preached at White-hall 29 February 1627’.

The socially distanced performance will take place in front of a small, invited audience in the beautiful Gothic Revival surroundings of Farm Street Church, thanks to Fr Dominic Robinson, parish priest of the Jesuit Church of the Immaculate Conception. Farm Street is known as a community which actively advocates social justice and nurtures music and art.

“The timeless and moving words of Cardinal Newman’s Meditation deserve to reach a wide audience. These new musical settings will provide the ideal medium for its message over the coming months and years. Expressing a strong sense of the community of mankind as it reflects on our specific role in life, the Meditation is as relevant to people of faith as to people who profess to no belief at all.

The Genesis Foundation, in partnership with The Sixteen and Harry Christophers, is committed to expanding the repertoire of modern sacred music and bringing it to wider audiences.. Newman’s Meditation reminds us that each moment of our life matters, and these new musical works will provide a powerful and resonant experience for one and all.”

Harry Christophers CBE, Founder and Conductor of The Sixteen, said:

“Whilst our programme Newman: Meditation & Prayer brings you the expectant thrill of two premieres, I have surrounded them by works spanning four centuries. Robert Parsons and Christopher Tye survived the Reformation and the turbulent years of King Edward VI and Queen Mary, living on to enjoy the relative security of a more established church under Queen Elizabeth I. That being said, their music is undoubtedly Catholic at heart. The soaring phrases of Parsons’ Ave Maria, his devotion on the name of Jesus, O bone Jesu, and Tye’s sublime Agnus Dei were written to make holy places come alive even more than usual. They remind us of the fullness of our British heritage, now made even richer by two brilliant new works based on Cardinal Newman’s A Meditation on Trust in God by Sir James MacMillan and Will Todd.”

Watch bonus films from the composers, conductor and more!

Watch the concert on demand