Season’s greetings from the Genesis Foundation 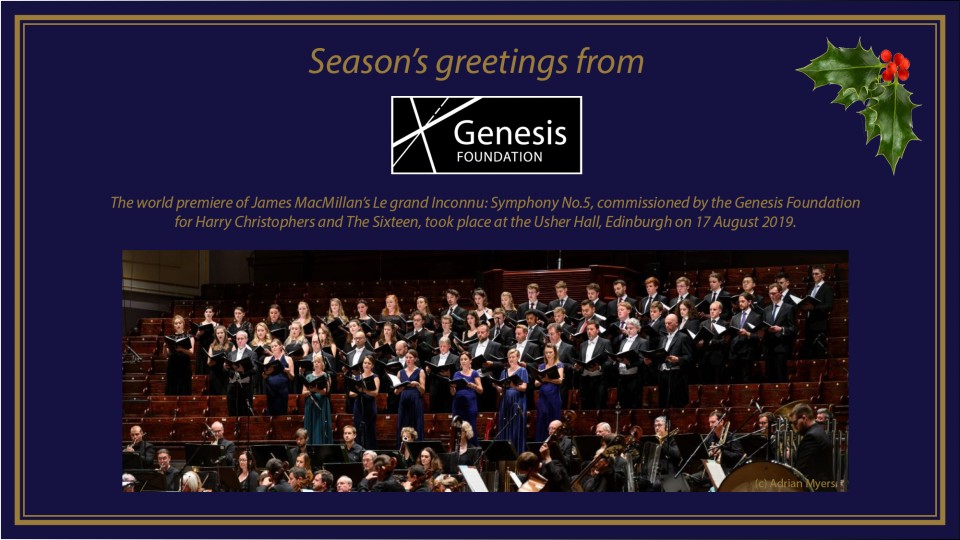 The Edinburgh International Festival presented the world premiere of James MacMillan’s Le grand Inconnu in August. Commissioned by the Genesis Foundation, this large-scale choral symphony (No.5) based on the Holy Spirit was performed by its dedicatees Harry Christophers and The Sixteen, alongside members of Genesis Sixteen, and the Scottish Chamber Orchestra. The concert was recorded for broadcast on BBC Radio 3 and subsequently given its London premiere at the Barbican with Britten Sinfonia. Read more here.

The Genesis Foundation’s previous major commission from James MacMillan, his Stabat mater, received its North American premiere in October at New York’s Lincoln Center in a performance by Harry Christophers, The Sixteen and Britten Sinfonia.

The Genesis Foundation is one of the biggest commissioners of sacred music, having commissioned 25 works to date principally for Harry Christophers and The Sixteen.

The Genesis Foundation sponsored the Royal Academy of Arts’ major exhibition, Bill Viola / Michelangelo: Life, Death, Rebirth, which ran from 26 January – 31 March 2019. The exhibition paired installations by pioneering video artist Bill Viola with rarely-seen drawings by Michelangelo, exploring how these artists shared a deep preoccupation with the nature of human experience and existence, despite working five centuries apart and in radically different media.

Inspired by the Bill Viola / Michelangelo exhibition, The Sixteen performed a concert entitled Miserere at the Royal Academy. The programme coupled music from the Sistine Chapel with musical responses from contemporary composers and included the world premiere of Angus McPhee’s Panem Nostrum… Ave Maria, commissioned by the Genesis Foundation.

Alongside the launch of the new Genesis Foundation website, The Genesis Podcast Series of conversations between artists and thought leaders was launched in the run-up to the Genesis Foundation’s 20th anniversary in 2021. Listen here to the first two podcasts of the series.

A major new partnership between the Genesis Foundation and the Almeida Theatre was announced with the launch of the Genesis Almeida New Playwrights, Big Plays Programme. This annual programme supports emerging and experienced writers in developing new plays for larger stages, giving them the space and time to experiment with form and scale. Find out more here.

In other theatre news, 2019 Genesis LAMDA graduating scholar Stuart Thompson made his professional stage debut in the National Theatre’s national tour of A Taste of Honey. Abubakar Salim (class of 2014) was selected as one of BAFTA’s Breakthrough Brits 2019. Read more about this here.

Seeking to increase representation within the UK visual arts organisations, Create London selected Losal Chiodak as the first Genesis Young Curator giving him the opportunity to work with them as well as Tate Britain and the Chisenhale Gallery to gain invaluable experience. Read more here.

This year, Genesis Sixteen announced its ninth cohort and 200th singer, demonstrating the ongoing success of the programme in nurturing the next generation of talented ensemble singers. In addition to performing the world premiere of Le grand Inconnu, the group joined the Hallé Orchestra for their BBC Prom performance of Berlioz’s oratorio The Childhood of Christ.

Photographer Joanna Piotrowska, 2011 recipient of the Genesis Scholarship at the Royal College of Art had a solo show, All Our False Devices, at Tate Britain. Find more on her work here.